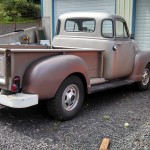 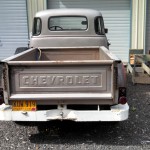 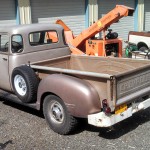 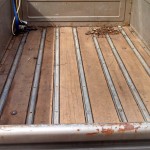 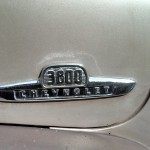 Back in September of 2013, I was approached by a customer of The Filling Station, Dennis Bosworth of Lebanon, Oregon, to do a complete restoration, with modifications, on his 1955 1st series Chevy 3/4 ton pickup. Most hobbyists don’t have a a good idea what it takes to do a ground-up restoration until they have done one, and usually once they have, they don’t want to do another. It’s a huge undertaking requiring hundreds of hours of hard work and thousands of dollars. It usually takes a minimum of a year, working at a moderate pace, and it goes up from there, depending on how much time and money they can afford to spend on the project.

This was a very nice original truck. It seemed to have a really straight body and fenders, but…. when I had the body sandblasted, the true nature of the beast appeared. In the past, a previous owner skim coated all of the fenders with body filler. Not a lot, but enough to cover up the hundreds of dings left in the metal from a pick hammer.

One of the first things to do was to remove the bed from the chassis. My trusty old JD 410 backhoe came in very handy for this chore. I was able to mount it onto the rotisserie so I could disassemble it easier. Once the cab and chassis were in the shop, the disassembly began. We decided to go ground-up, so everything had to come apart. 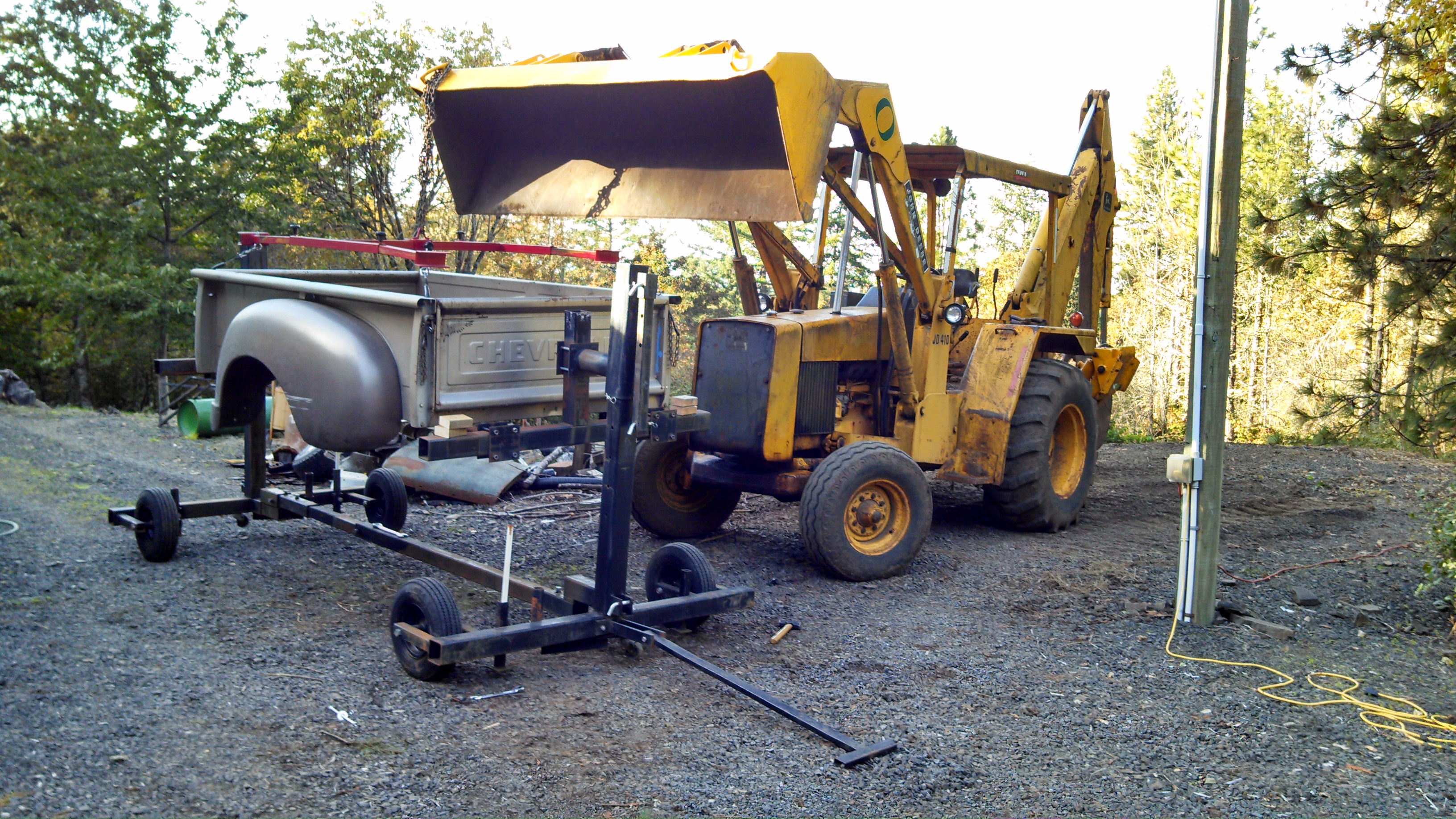 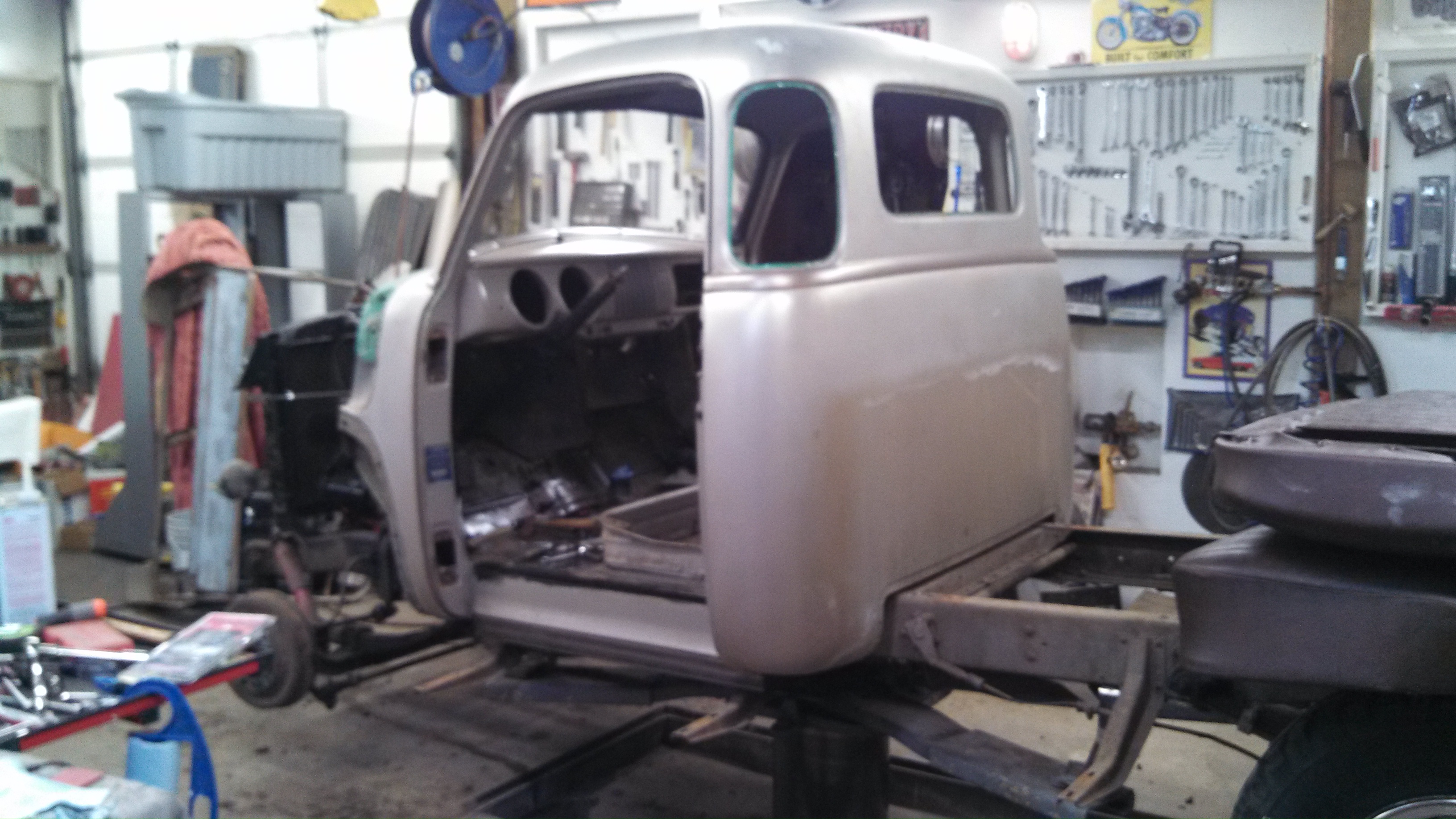 There were not a lot of big issues with this truck, and that was one reason I decided to take this project on. It did not start as a ground-up restoration, but as so many of this type of projects go, it turned into one. Once you get so far into the disassembly, it’s almost foolish not to go all the way.

One of the issues with this truck was the front right leaf spring. When I put the truck on the hoist and lifted it in the air, I noticed that the front right wheel was hanging in an odd way. When I took a better look, I noticed that the rear eye of the leaf spring had broken off and the spring was disconnected from the hanger. Obviously new front springs were in order for this truck…but this was just the beginning. 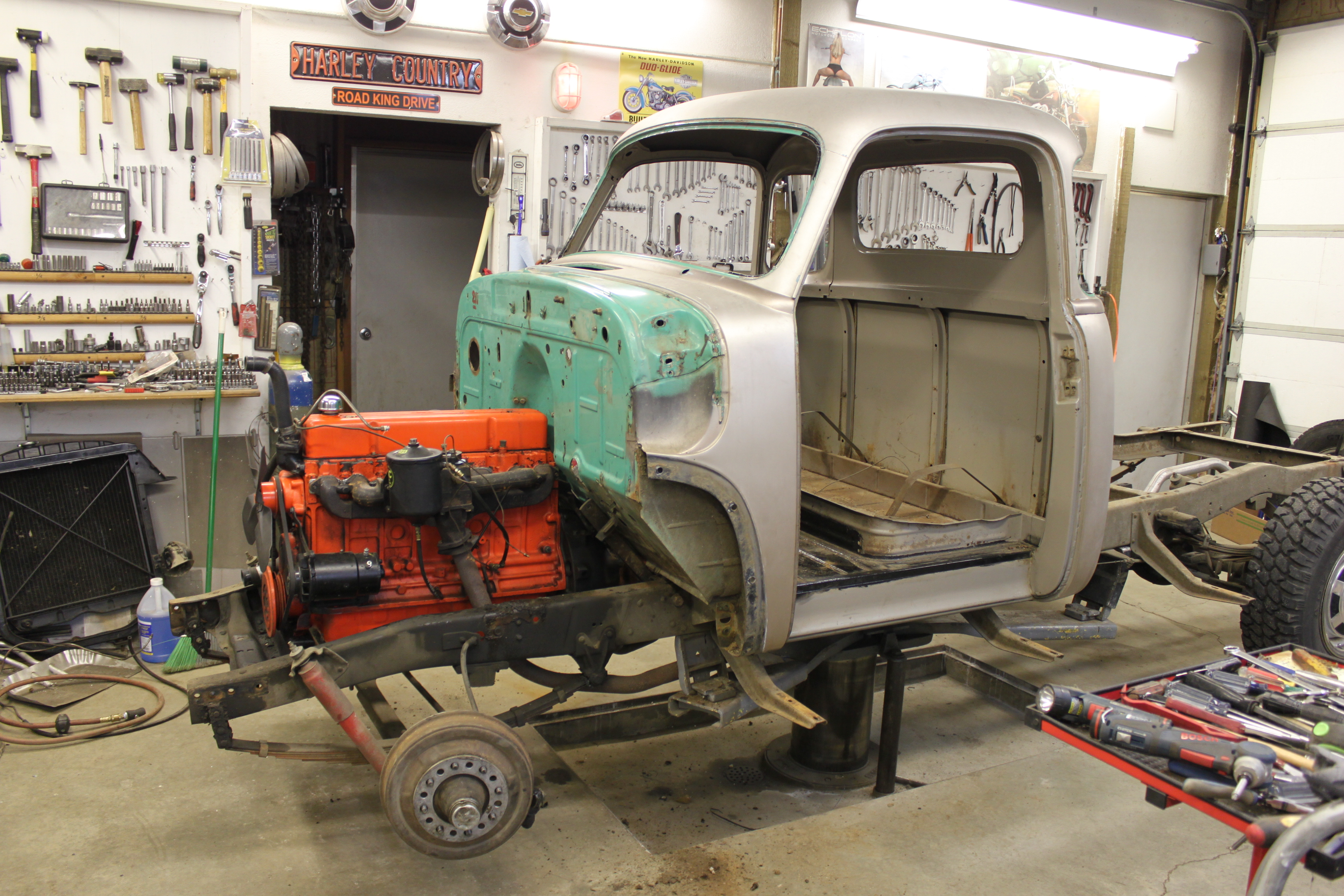 In the picture above, the front group has been removed and now it was time for the cab to be disassembled and removed from the chassis. In the pictures below, I now have the cab removed and I can get a better picture of what will need to be addressed in the chassis area. 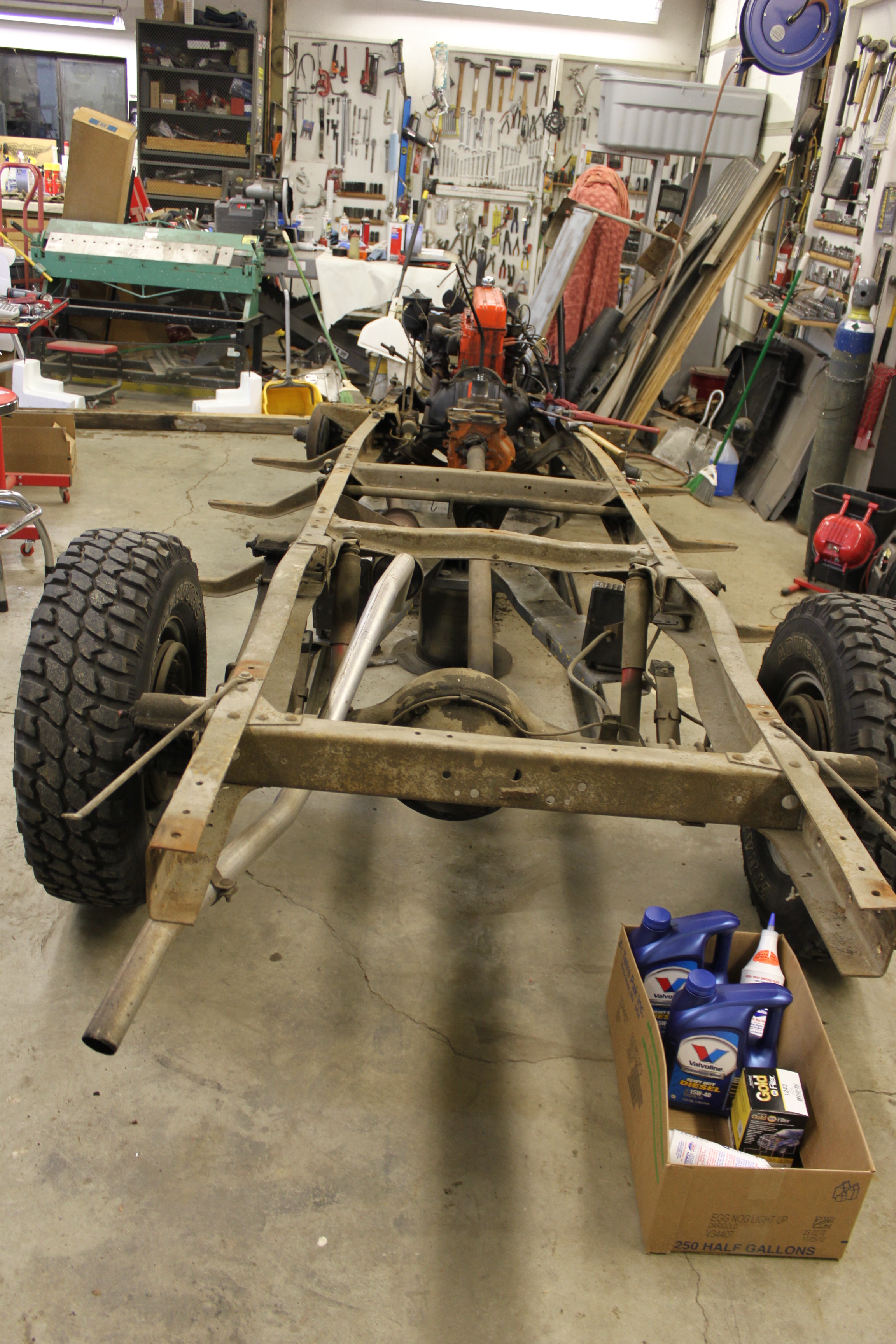 There are lots of decisions to make at this juncture. Getting a mental picture of the finished product is an important one. Decisions like staying to bone-stock original, or modifying the vehicle to make it more road-worthy is a big one. In my opinion, the road-worthy one is the way to go. I feel that if you don’t go that way, you won’t end up driving it much in the future, which is the reason a lot of vintage vehicles get sold down the line. My customer wants to drive it a lot, so the decisions to upgrade components like the steering, brakes and rear end gears were made and we started the grand plan.

With the engine out, it’s time to remove the rest of the chassis components so it can go to the sandblasting shop for blasting and priming. Now, back from blasting and priming, it’s time to mount it onto the rotisserie so I can roll it into the paint boot for it coating of Commercial Performance Coatings  AUE-100 two-part black paint, which is a great coating for a chassis and reasonably priced. 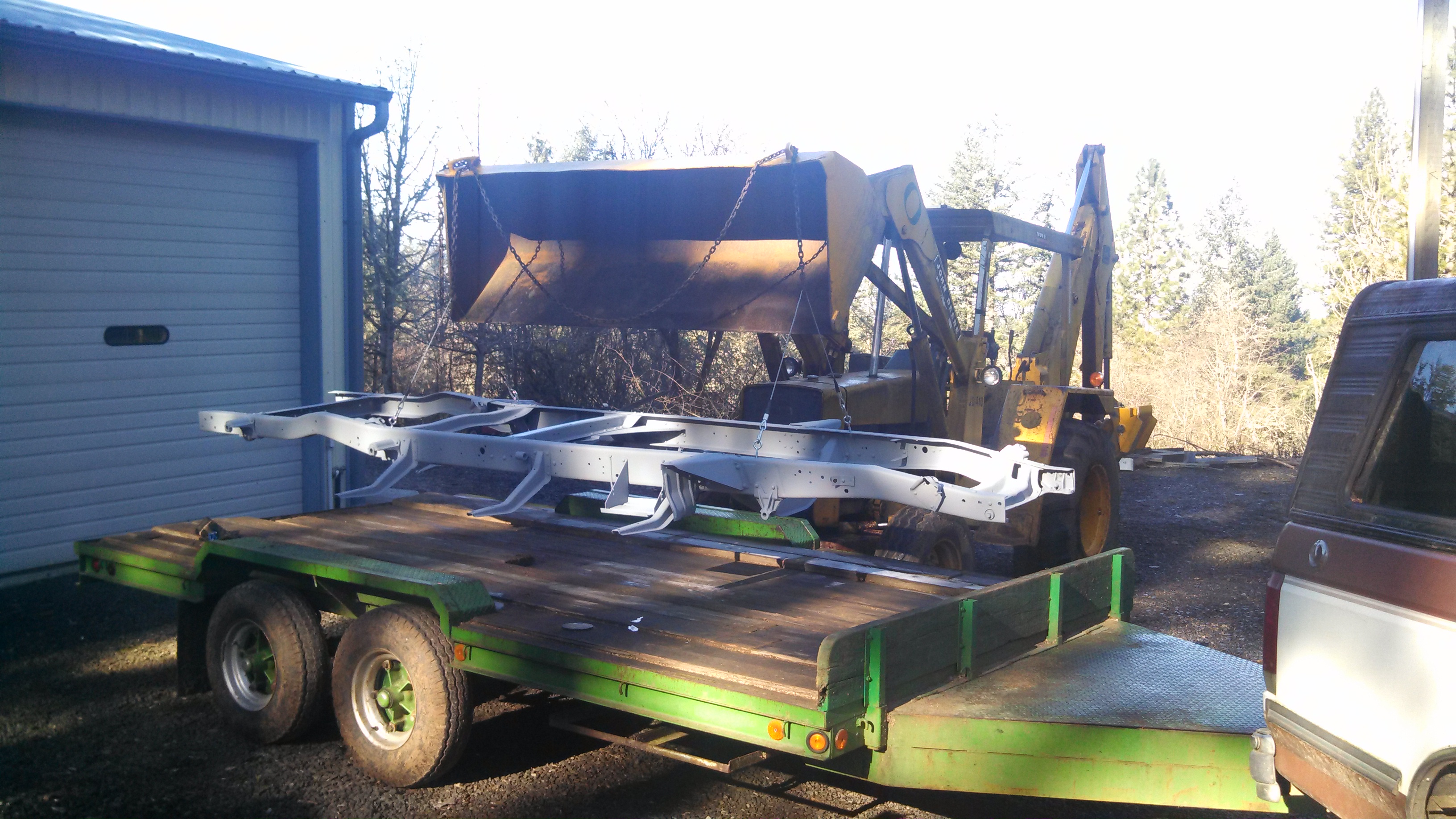 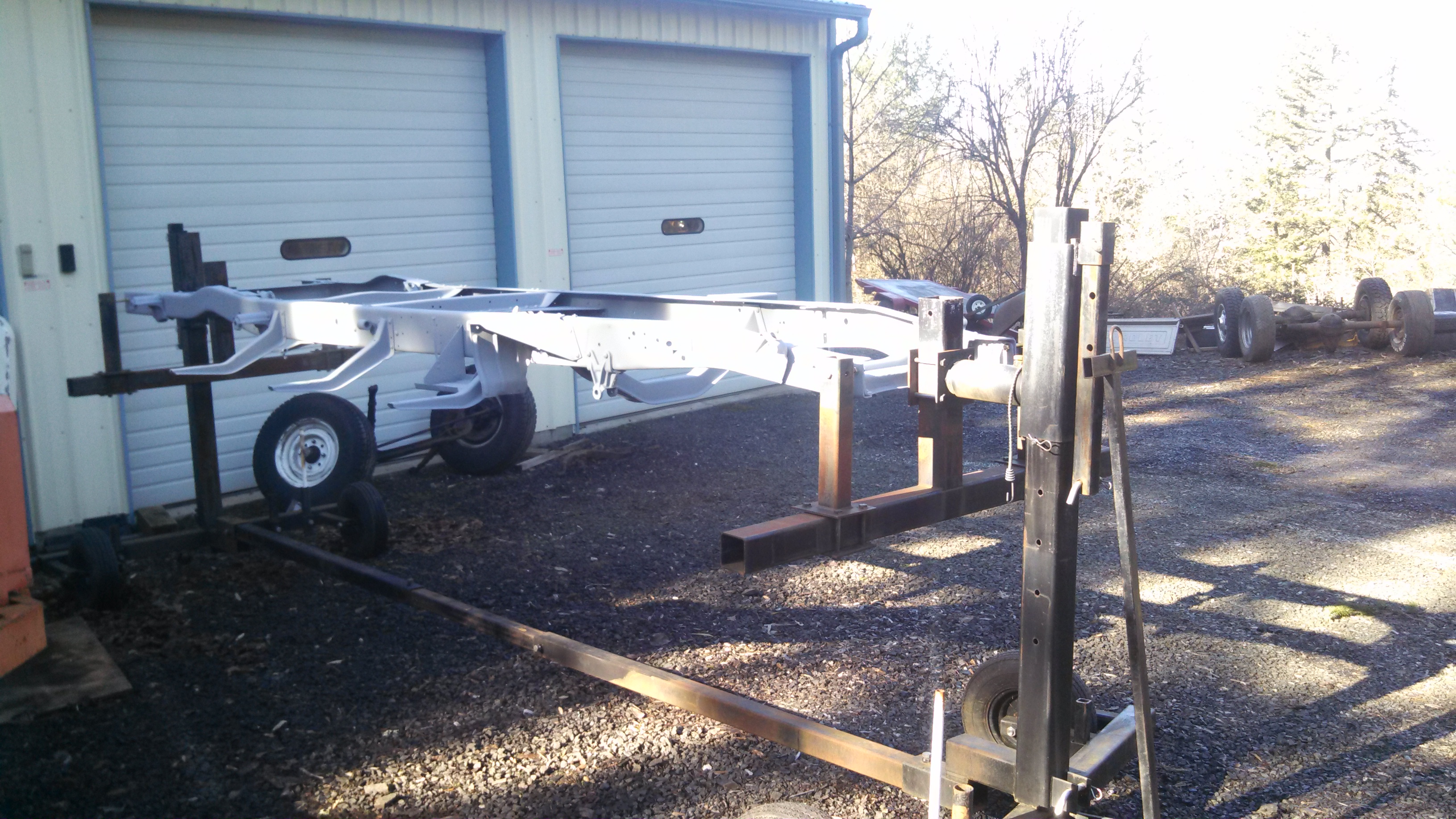 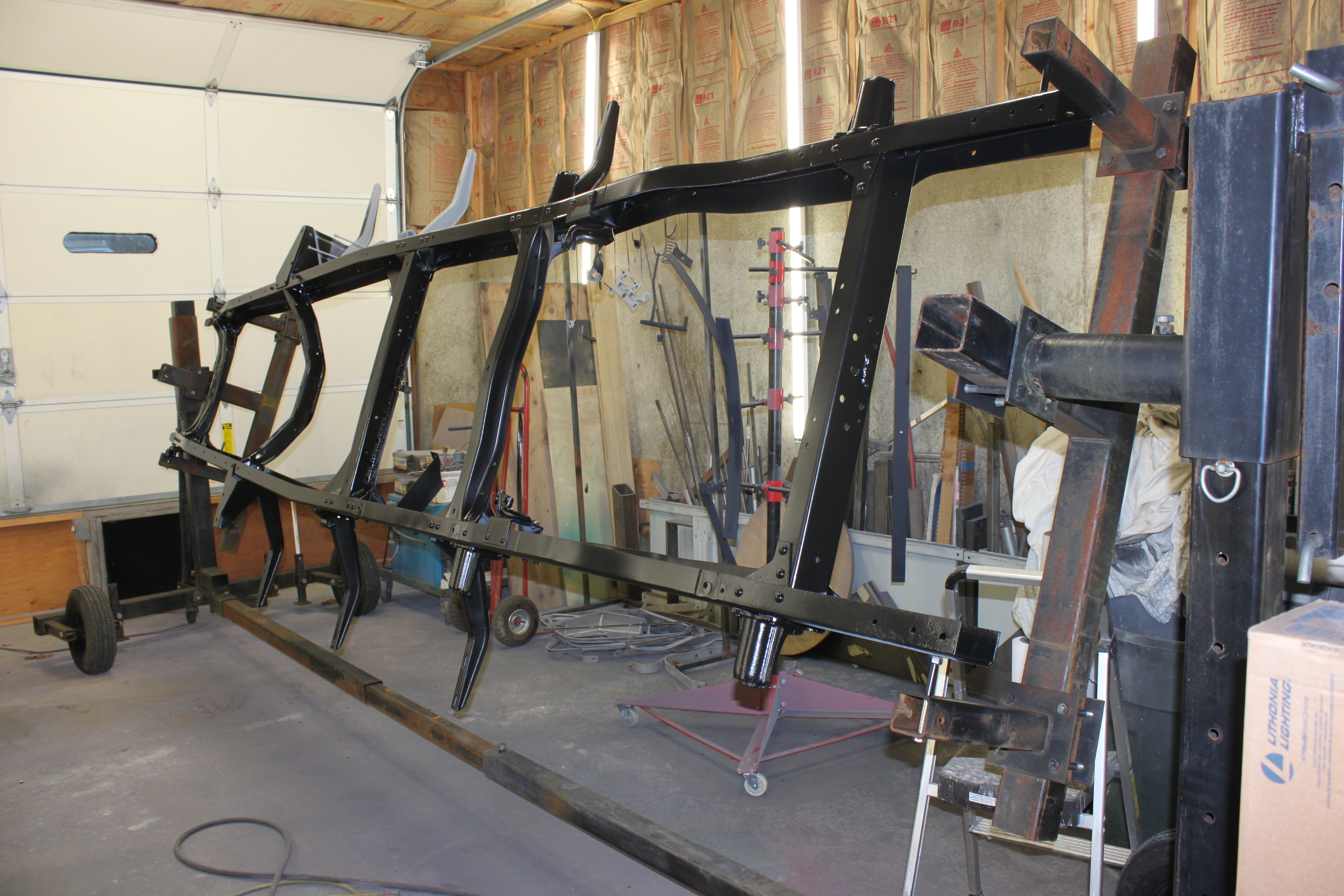 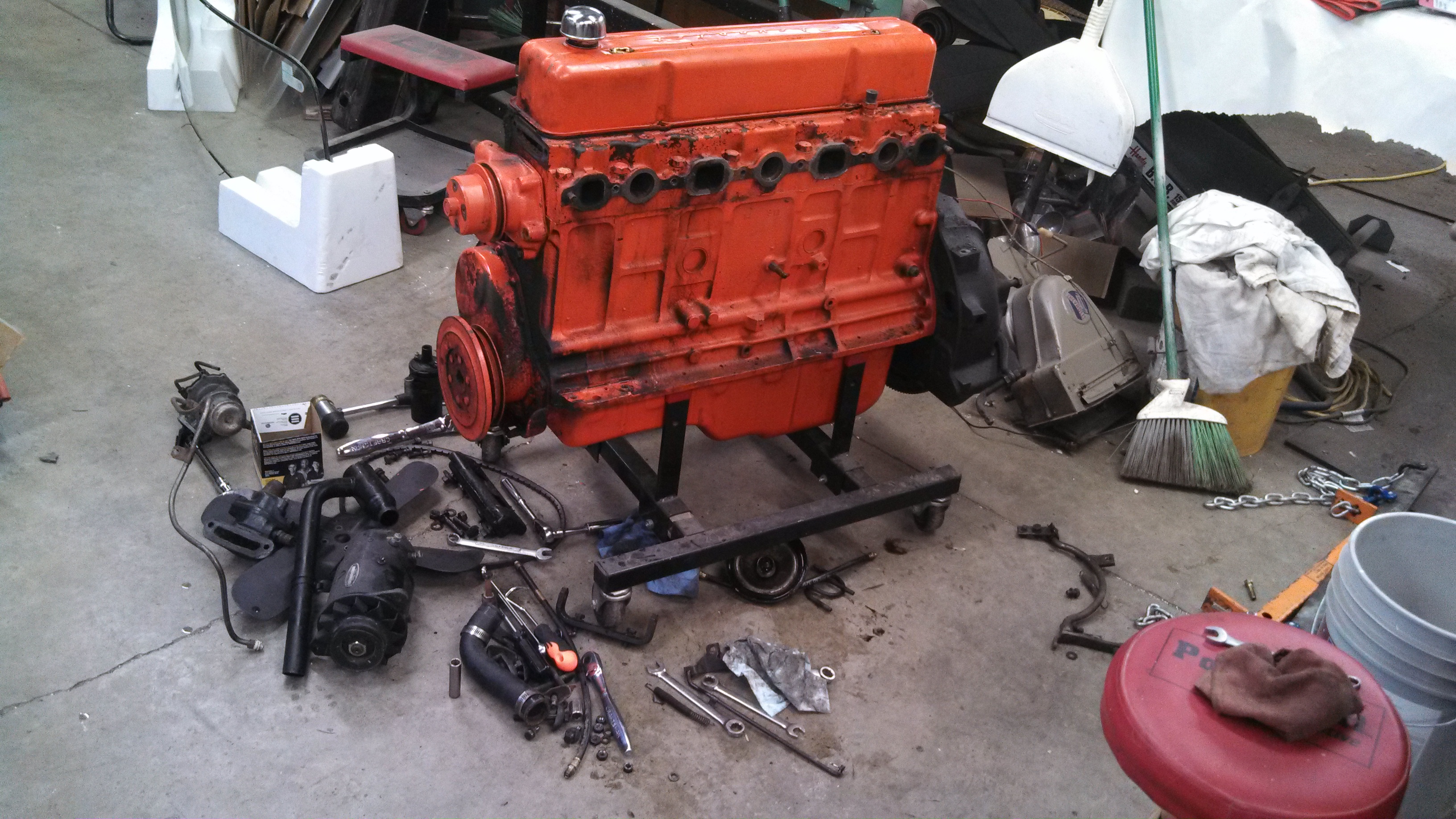 The engine had been rebuilt by the previous owner, so for now, it’s good to go and we will only do a few external upgrades on it, like paint, rebuilt carb, power steering pump, new fuel pump, Fenton headers, etc. I stripped the orange color with a pneumatic pin scaler to get down to the bare casting so I could paint it the blue/gray color of the era. The transmission was sent to a mechanic friend of mine for rebuilding. 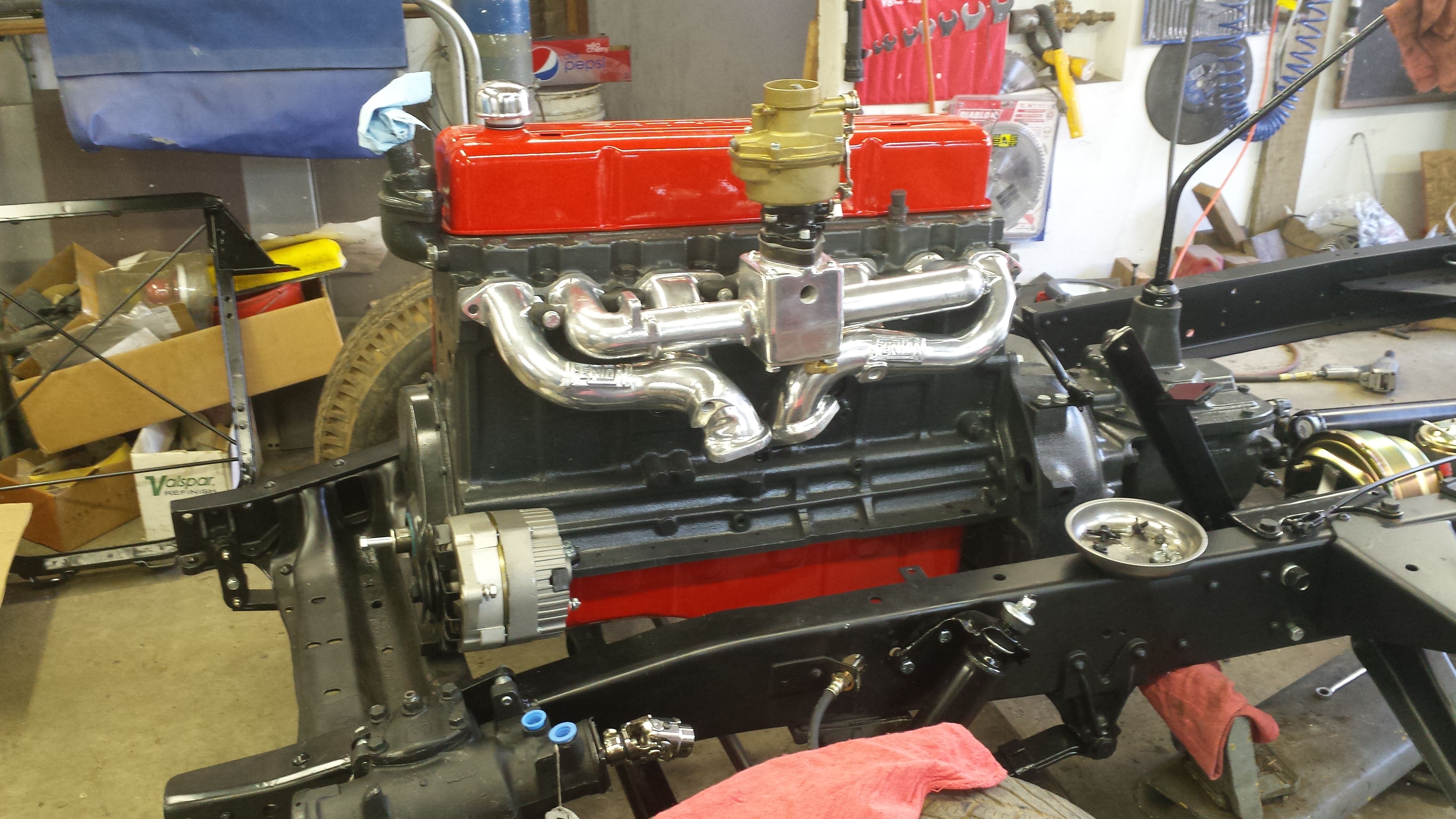 This is the newly painted engine in the original color for the year. The red sheet metal is the color I will be painting the cab and bed. The fenders and outside sunvisor will be a silver/gray metallic color. I had the Fenton headers coated in a ceramic coating (called “Ceramichrome” by Finishline Coatings in Portland, OR) that resembles chrome, but won’t discolor like chrome will under the high heat of the engine exhaust. My customer wanted the Fentons chromed, so this was the best option.

This is the power steering pump mounting bracket I purchased from Buffalo Enterprises in Arlington, Washington. I had to modify it a bit to work with the Fenton Headers, even though Buffalo said it should have bolted right on. Must be a difference in the headers he used for mock-up and the ones I installed. 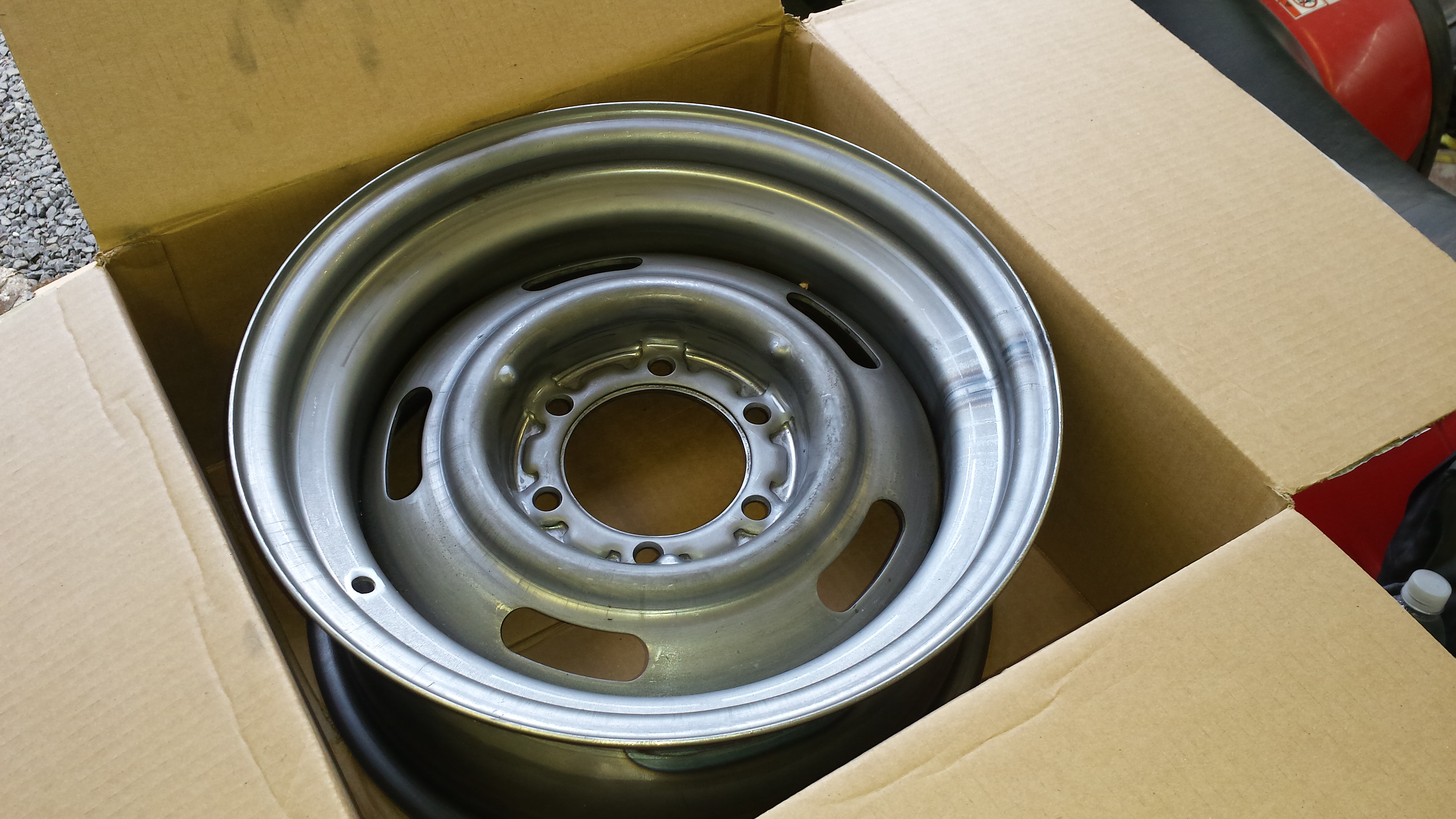 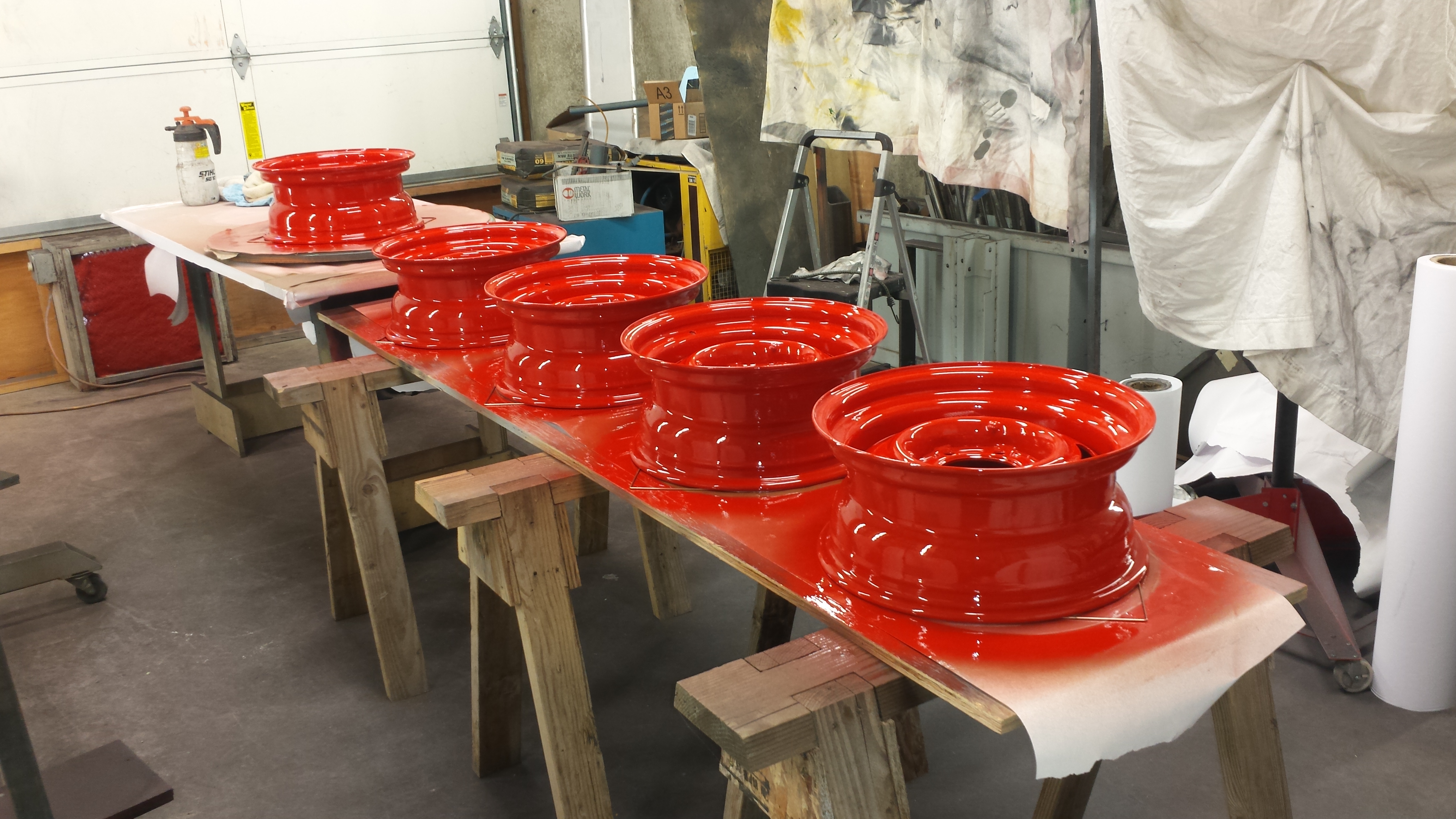 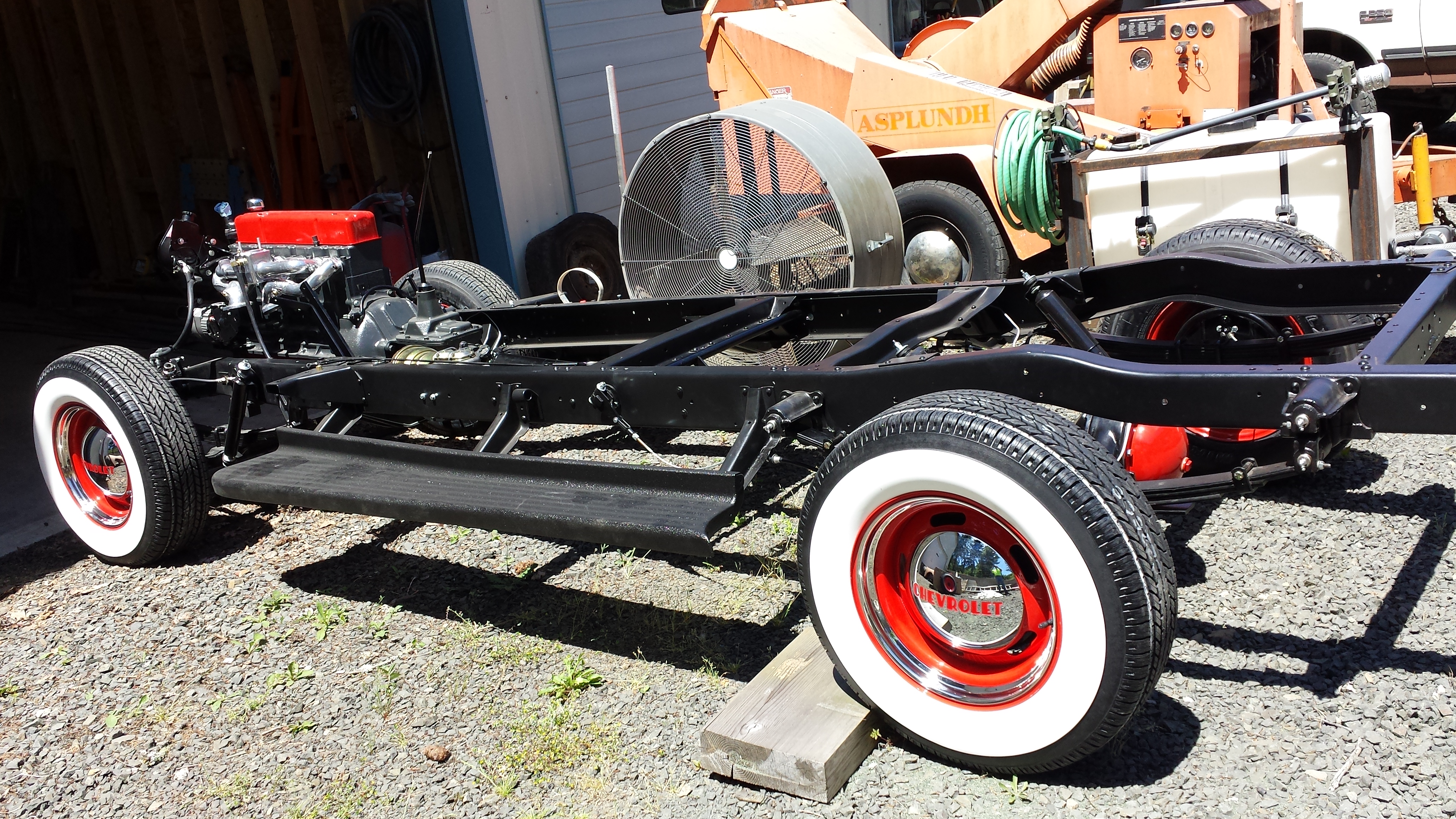 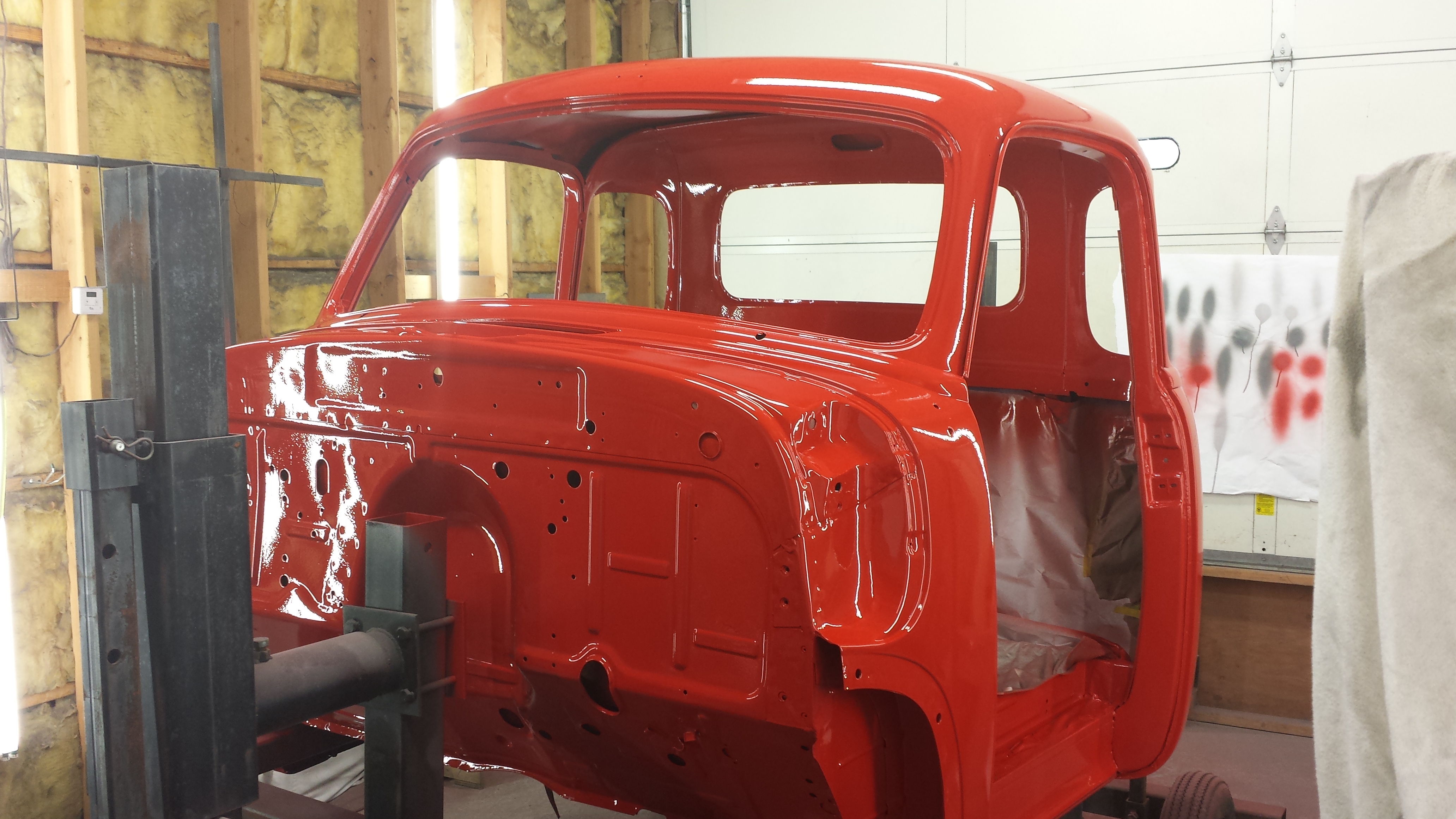 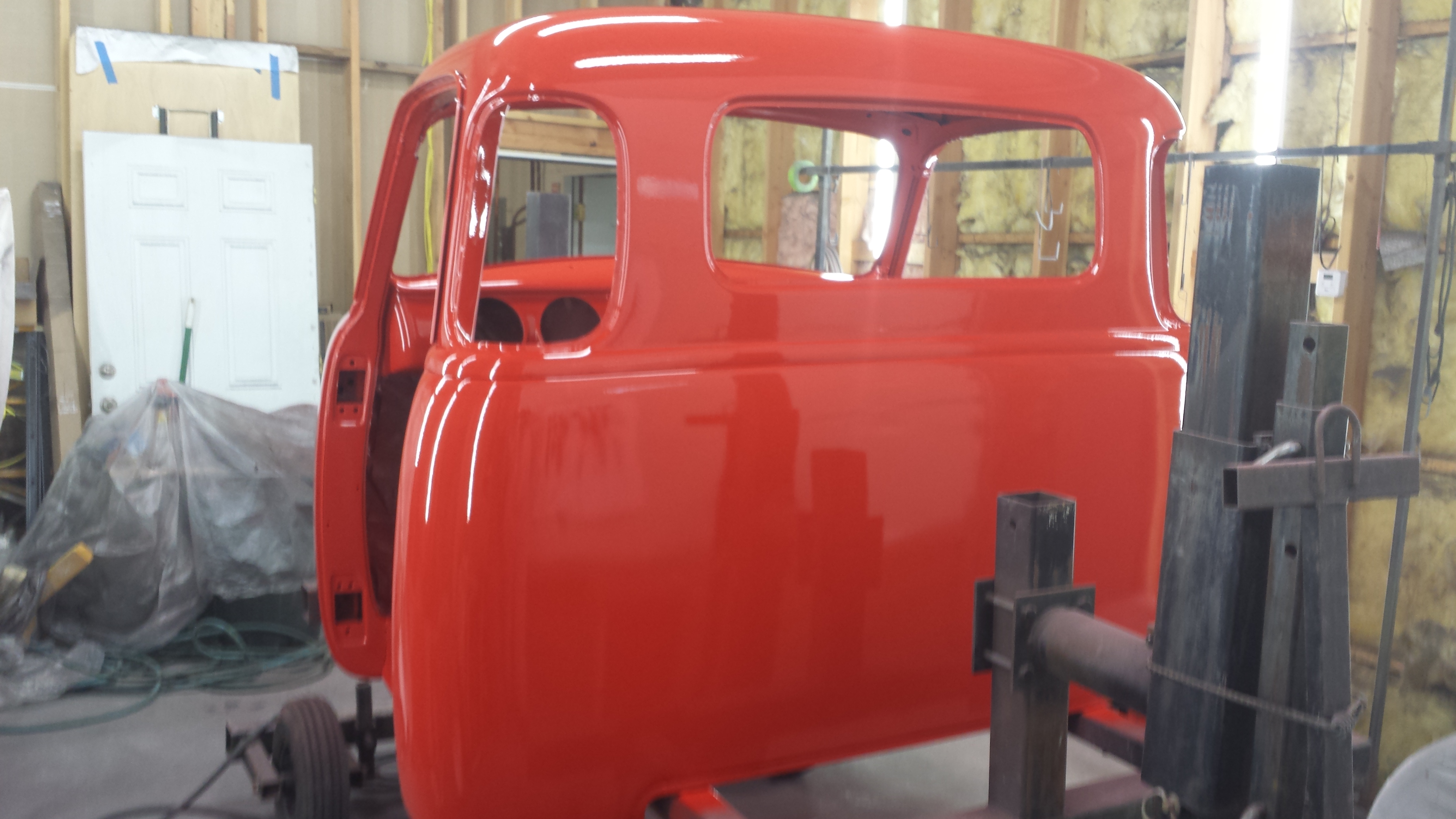 Now it’s time to get the cab painted. I’m using a two-stage Martin Senour/Crossfire paint, which I purchased through my local NAPA Auto Parts store. I have found that it is a very nice quality paint at a more reasonable price than the PPG that I normally use. The black paint you see on the floorboard is a Commercial Performance Coatings AUE-100. It’s a catalyzed paint and I really like it for ease of application and durability.

Now that the cab is painted, I have to cut and polish the clearcoat to remove the “orange peel”, which is a long tedious project.

During the mock-up process, my customer decided that he wanted the 1939 Chevy sedan style taillights on the rear fenders. The only problem is that he didn’t like them protruding out that far, so I had to semi-french them into the fenders to tuck them in a bit. This required cutting off the rear end of the taillights, plating them and using riv-nuts to provide a mounting option. 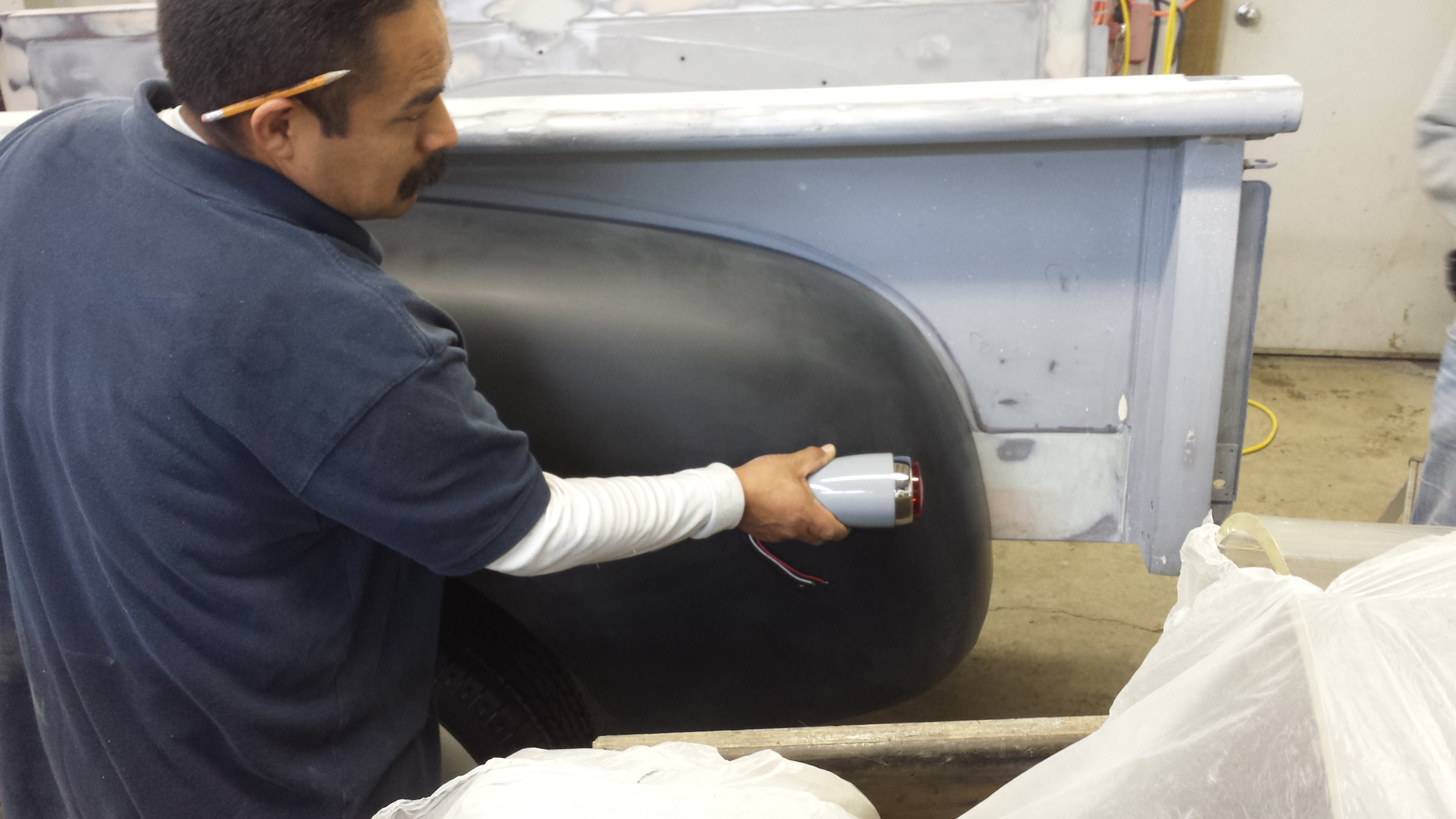 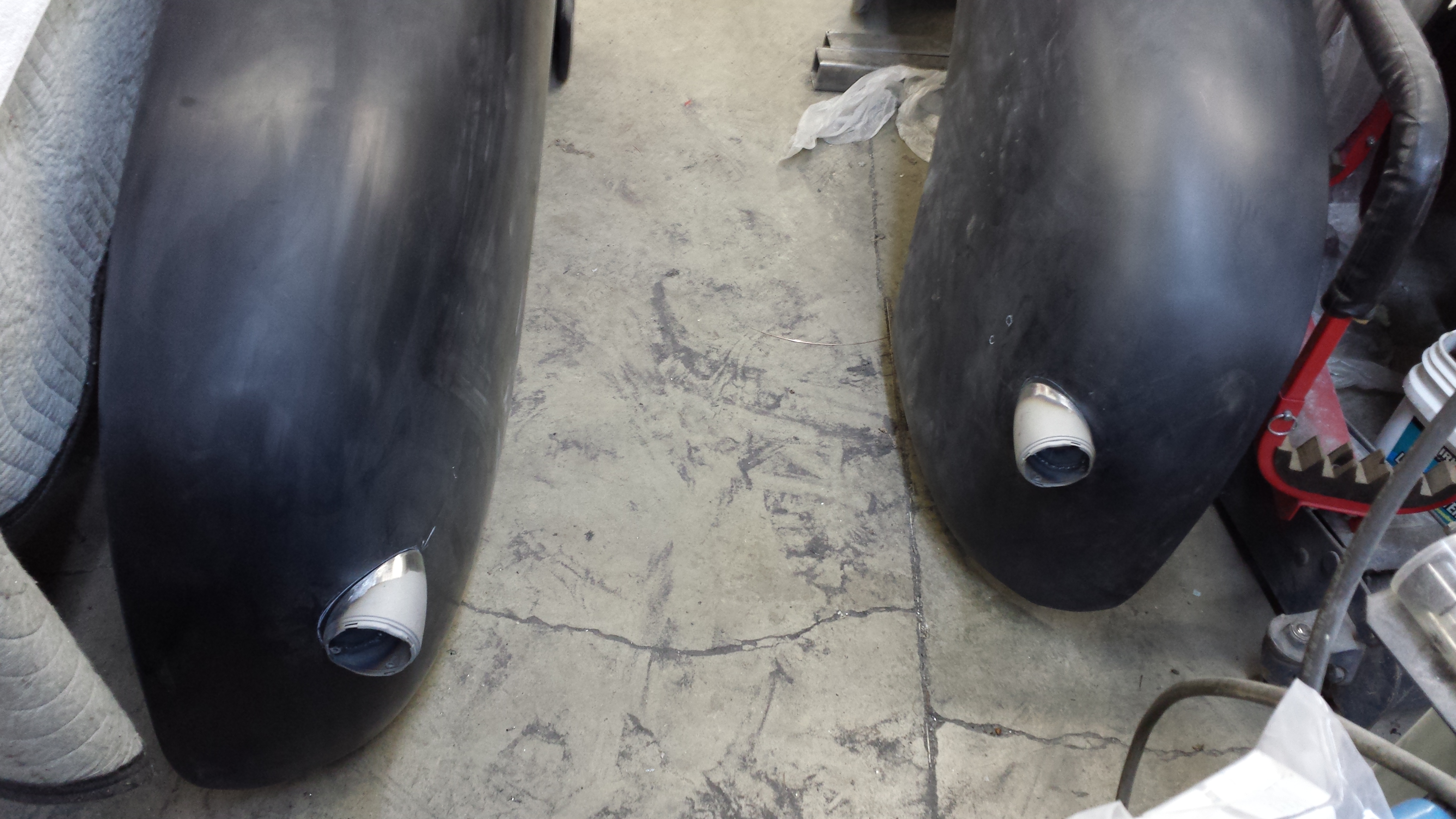 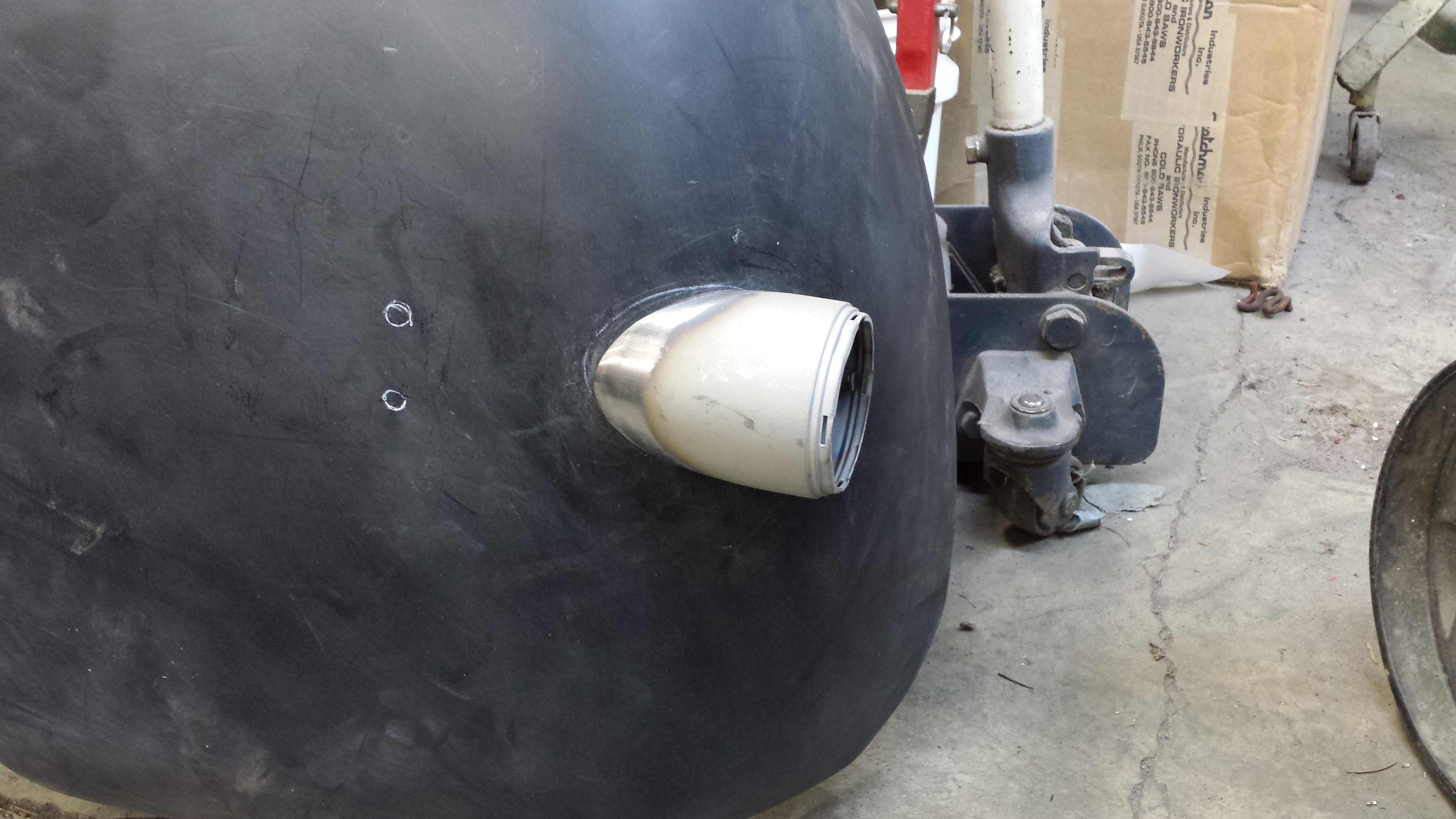 Now with the cab back on the chassis, I can start mocking up the front-end sheet metal. The doors were mocked-up previously.  The interior of the cab is now in the reassembly stage too. 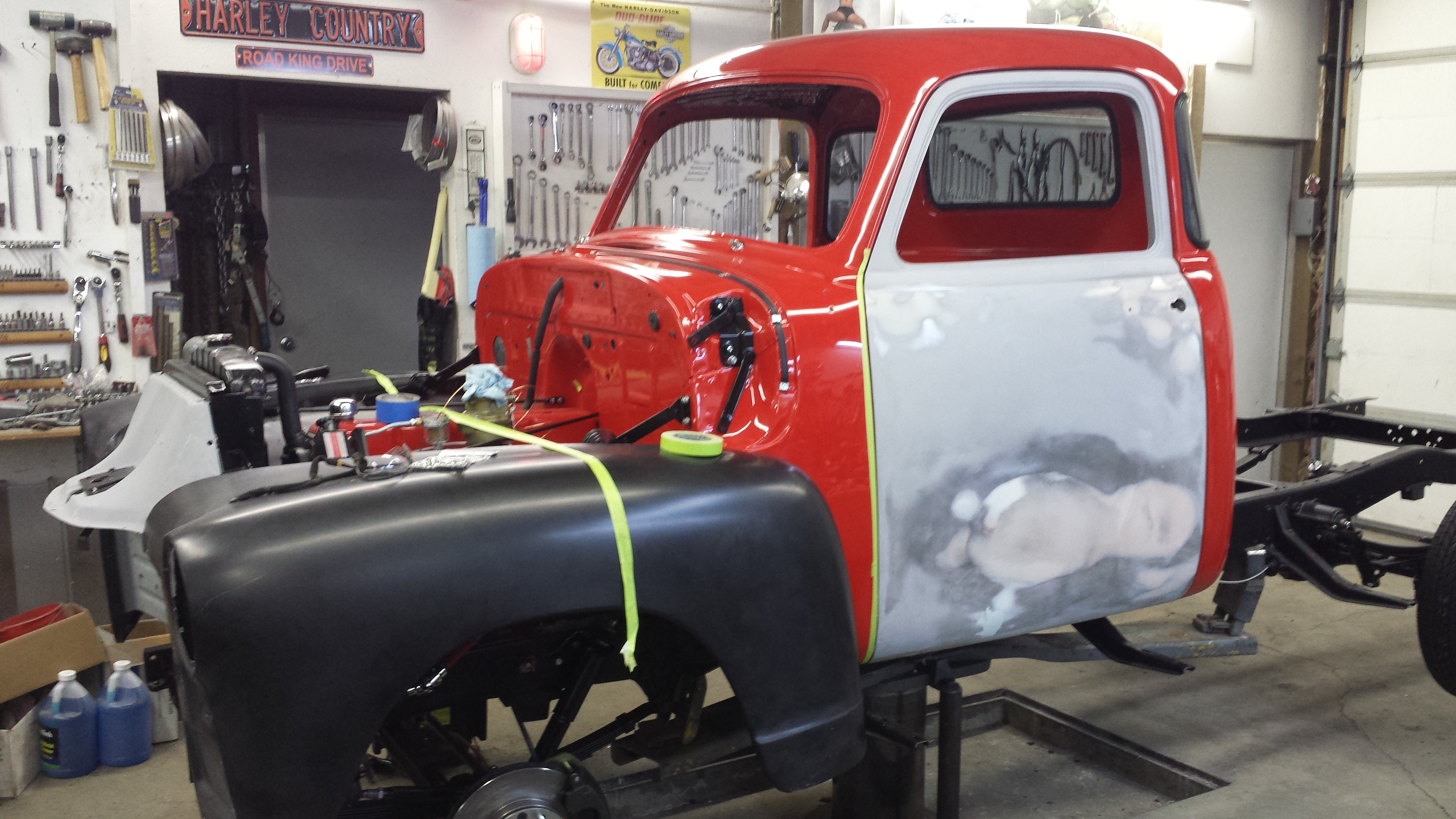 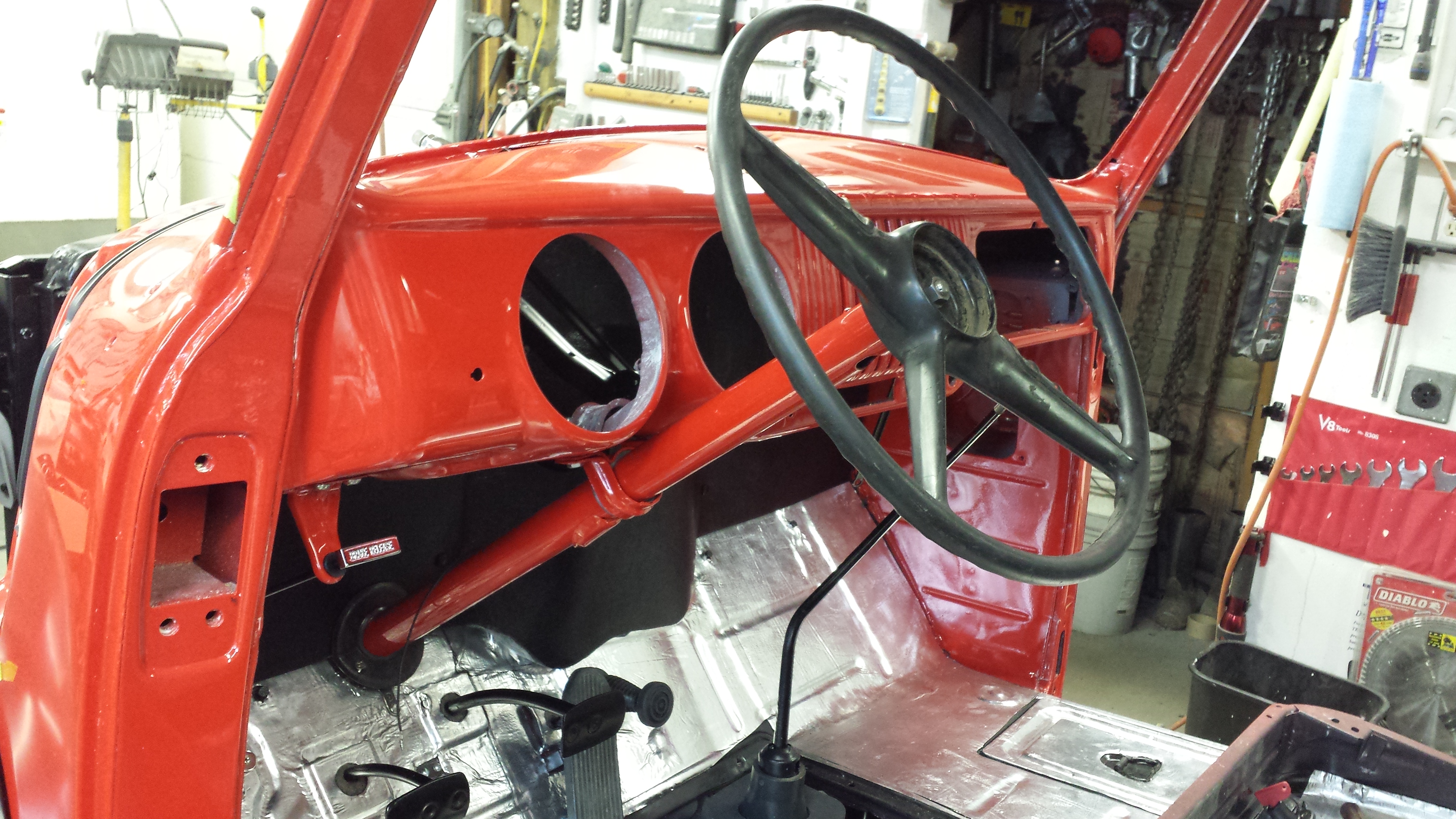 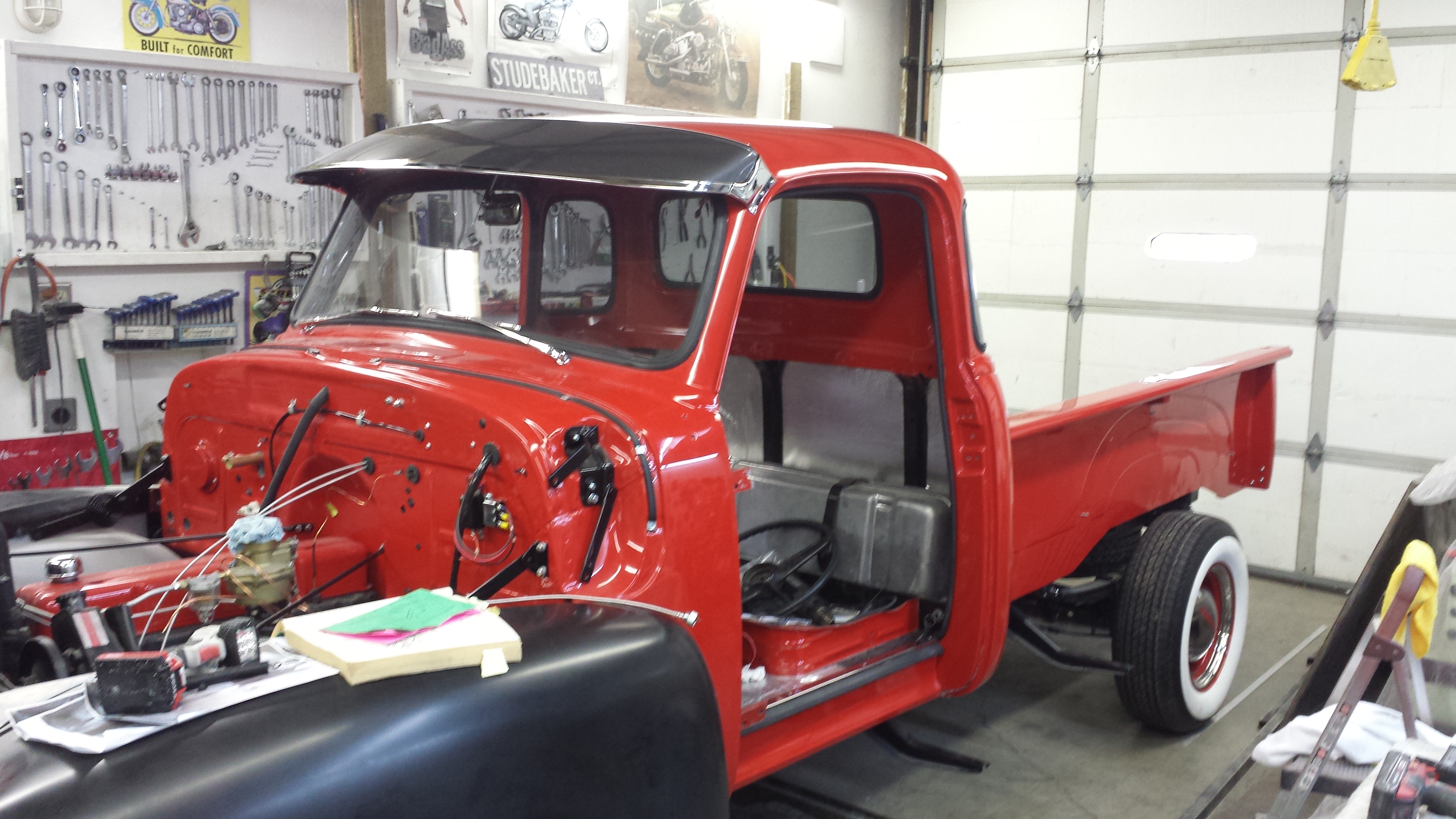 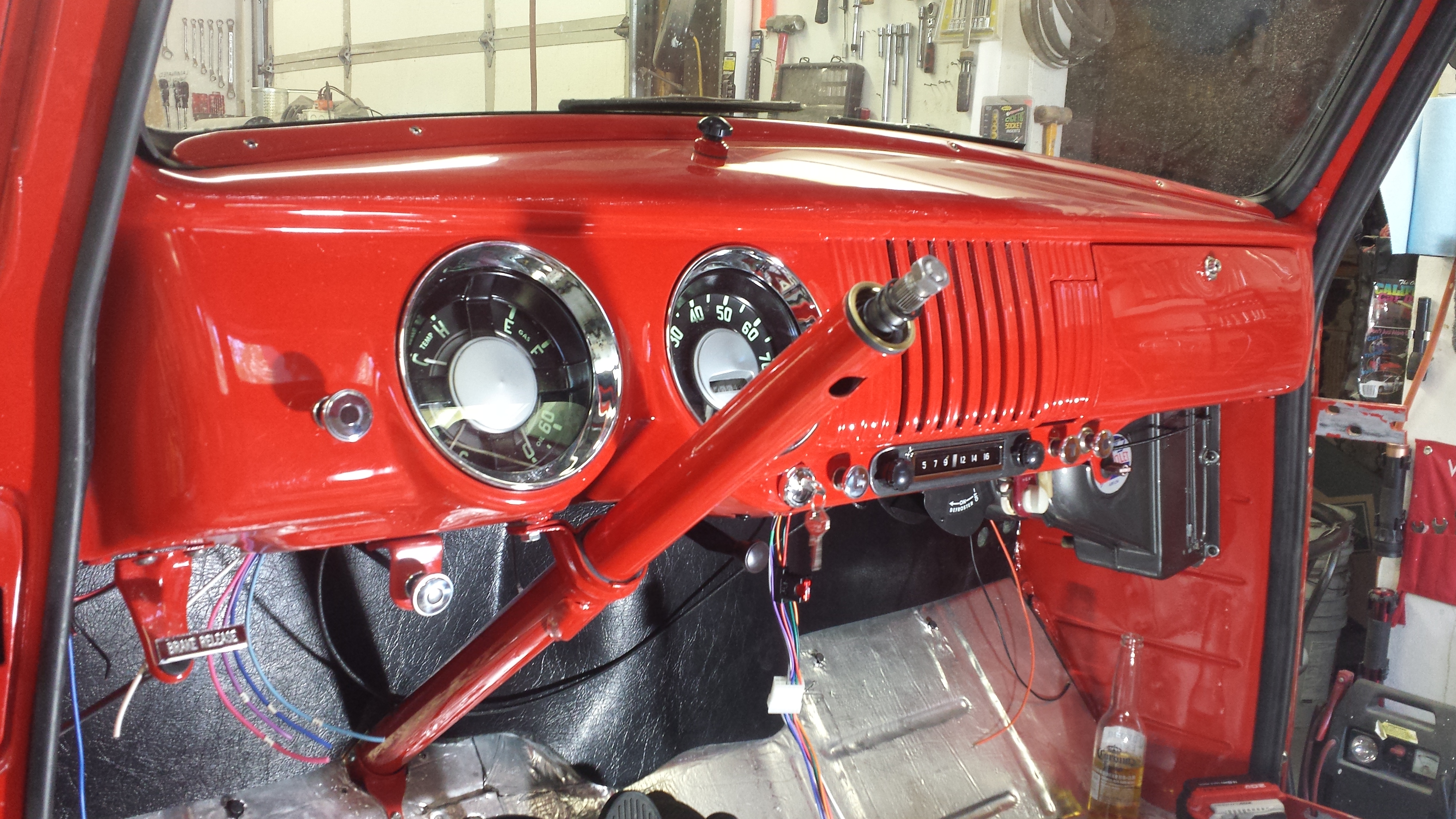 Reassembly continues. This is where it starts to get exciting! I had a lot of help from my friends here. The upholstery was done by a guy in Salem Oregon named Ed Bravo. He did a great job on it! 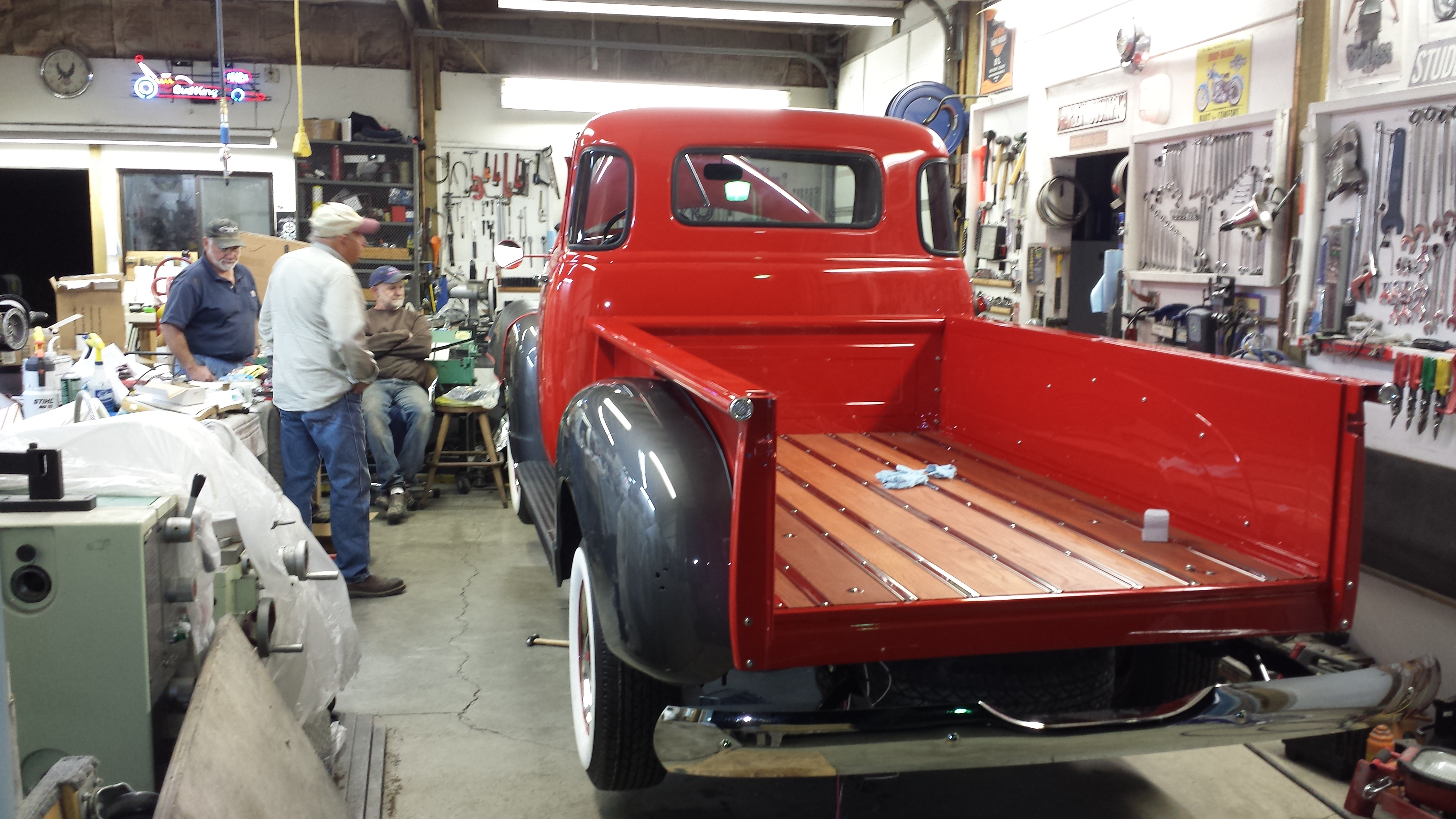 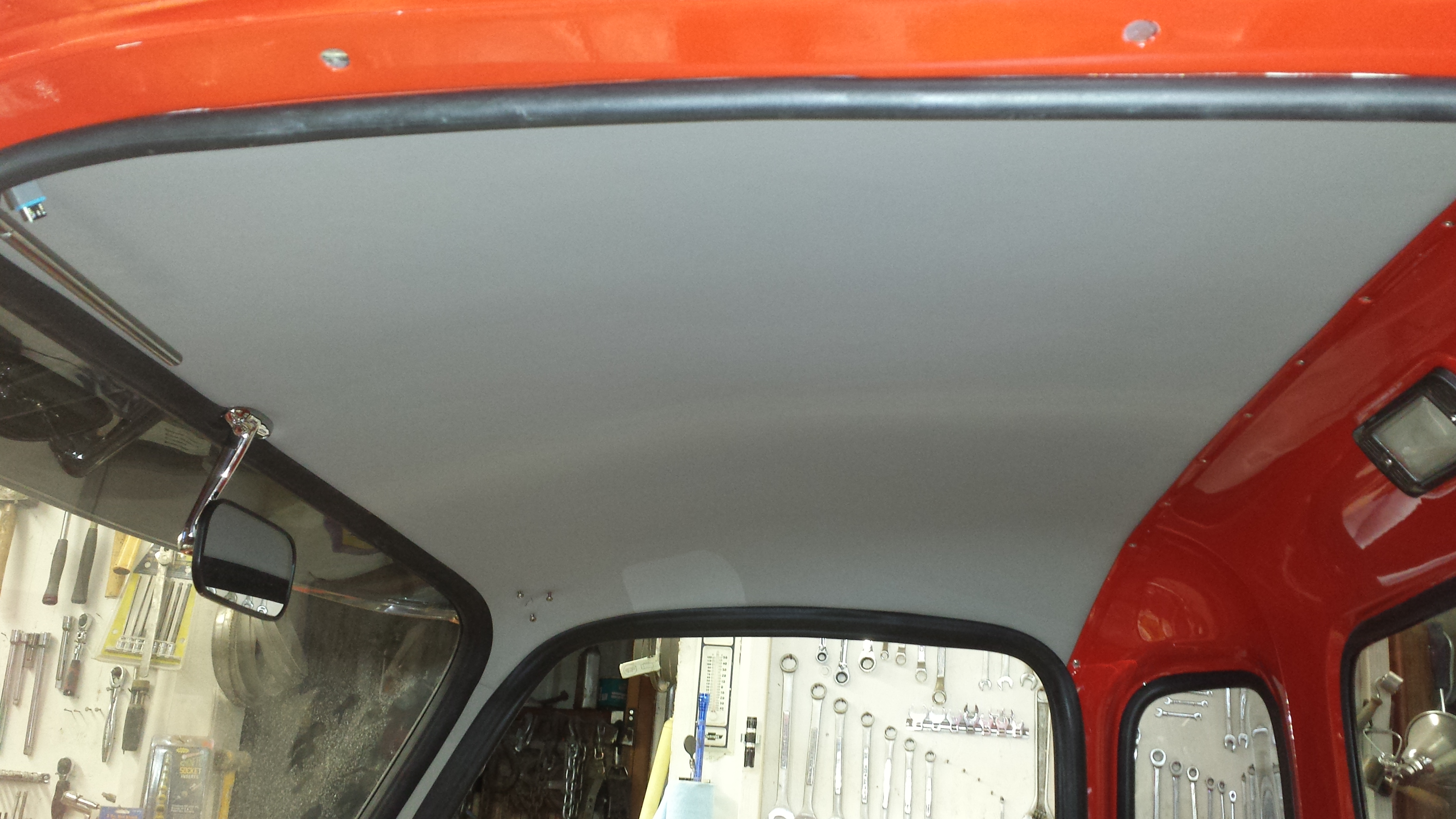 The truck is finally ready to go to the muffler shop for its new stainless steel exhaust system. 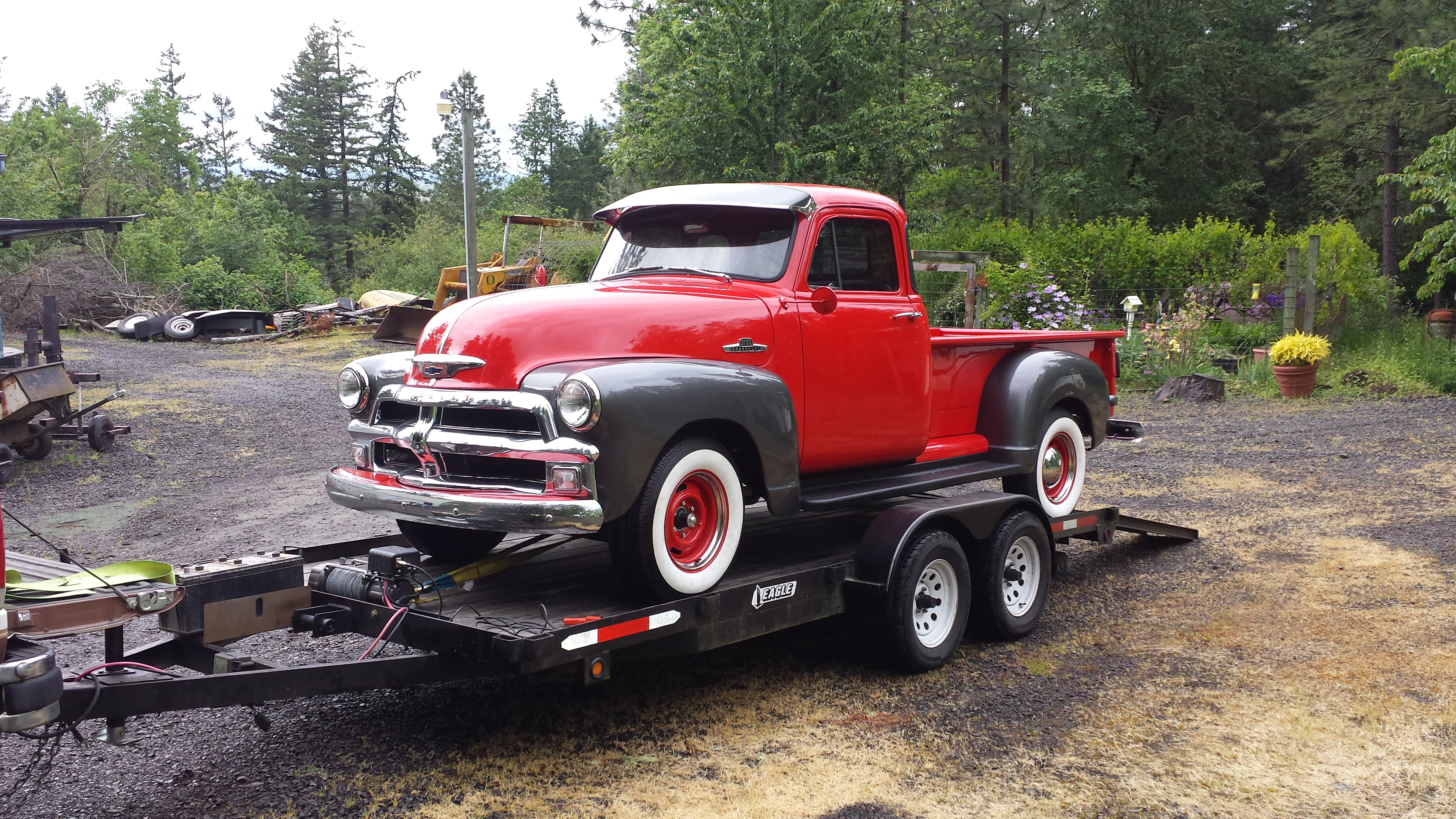 I was able to get a local sign maker to cut some vinyl letters for the tailgate. We found a vinyl that almost perfectly matches the metallic silver color of the fenders!

Now with the new exhaust and the rest of the truck together, Dennis takes his first ride in his new truck! This was a gold star day for him, after his 18 month wait. 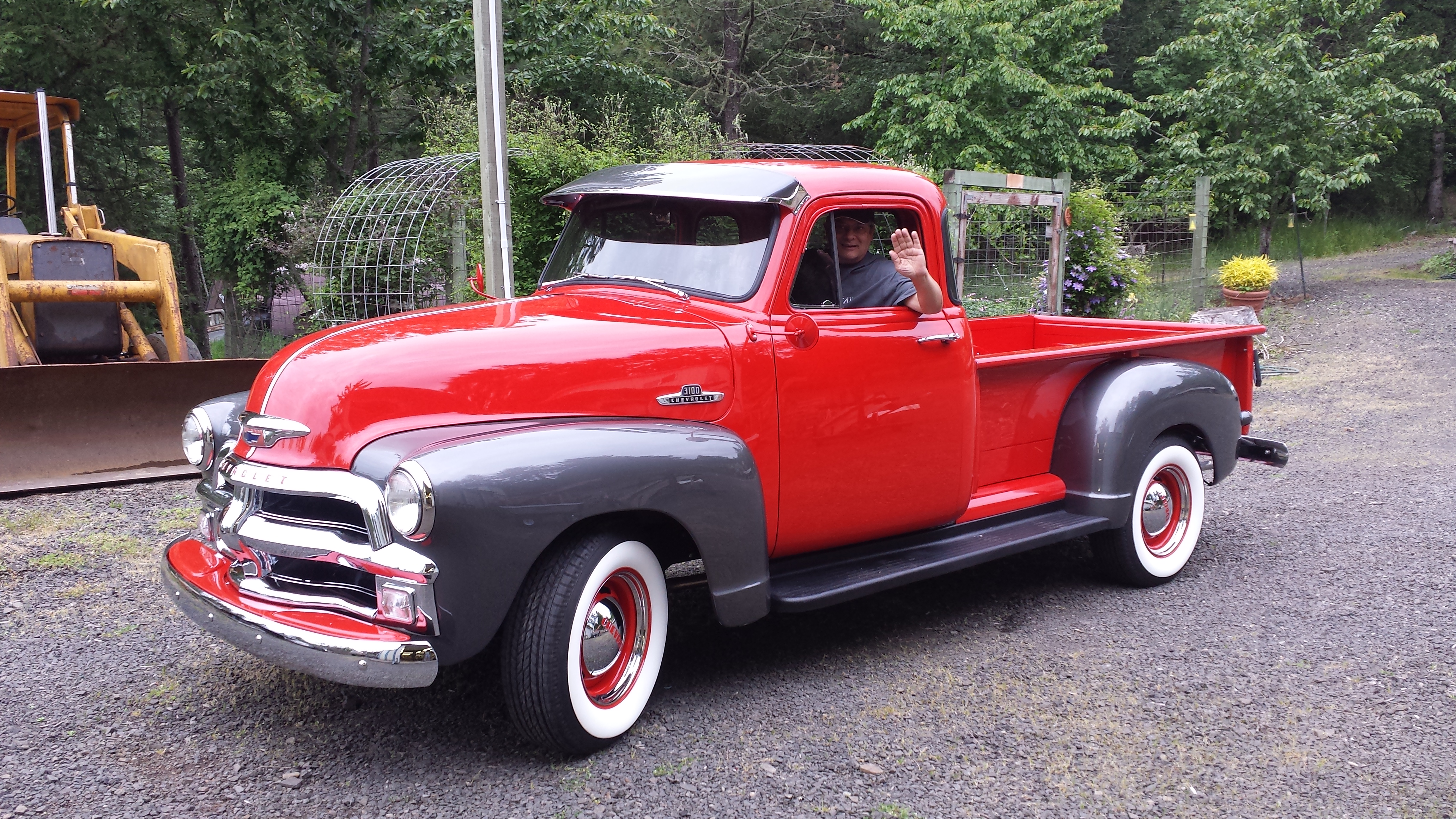