Installing a wood bed kit in your pickup? Here’s a tip you need to know to save you a lot of frustration!

I have installed a lot of wood bed kits over the years, as well as having a time in the past where I used to mill the bed boards for The Filling Station. One of the most frustrating things about installing a bed wood kit in a truck is getting my “sausage” fingers up into those narrow cross-sills with a nut, lock washer and flat washer in my fingers and then trying to get a thread started all at the same time! There are a LOT of bolts in this bed and many of them have to go between the narrow channels of the cross-sills. There had to be a better way, so after a lot of thought, I devised a way to take most of the frustration out of this task.

I normally have a helper on top of the bed with the boards, skid strips and cross-sills in place (if you are alone, just put something fairly heavy over the bed strip you are working on to hold the carriage bolt from moving when you are below trying to get the fasteners started). My helper holds the carriage bolt in place while I’m under the bed getting the nut, lock washer and flat washer in place. To do this easily, I machined an aluminum tube (adapter) to fit over the OD of my nut driver (interference fit) that holds the nut, lock washer and flat washer all at the same time. There are two sizes of nut drivers you need to install the fasteners in the early Chevy bed, 7/16″ and 1/2″. The 5/16″ carriage bolts that go into the angle strips on the bedsides take a 7/16″ hex nut and the 1/4″ carriage bolts that go into the skid strips take a 1/2″ hex nut. Hence, I had to make two of these tubular adapters, but TRUST ME, the effort is worth the time spent and will make this task SO much easier! One caveat… You need a metal lathe or know someone that can machine these adapters for you.

Note: There are different diameters of flat washers out there, so the overall diameter of the adapter needs to be the OD of the washer you will be using plus at least 1/8″. This will give you enough material to cut the counterbore for your washer to sit in. The machined ID of the adapter is determined by the OD of the head of the nut driver. I know all of this sounds complicated, but it’s really not. I just wanted to explain this as clearly as possible. If you are still having trouble grasping this concept, you can email me at drjsrestorx@comcast.net

Here is what I did: First, I took a piece of aluminum tubing (you can also use solid stock and bore it out) that had an OD a little larger than the OD of my nut driver.

I bored out the ID of the tube to make an interference fit over the OD of the head of my nut driver. I did this in small increments so I could test-fit the tube over the head of the nut driver so that it would go on and stay on with a little pressure, but would come off by pulling on it slightly. If you make the bore too large, you can use a piece of paper to wedge between the two in order to get the adapter to stay on the nut driver head. With this ID, there should be enough room to drop the nut into the hex of the nut driver, followed by the lock washer.

Now the nut, lock washer and flat washer are all captured with the nut driver, they’re ready to easily install onto the carriage bolt. Just lift it up to the bolt and turn until the nut catches your bolt thread and tighten it up!

Warning! The driveshaft is under tension from the rear springs and is heavy, so before you disconnect the U-joint, be sure to have a jack of some sort under the driveshaft for support.

Once you disconnect the 4 (or 6) bolts holding the U-joint together, the rear yolk will push back into the torque tube and you can drop the driveshaft down. Then the ball housing and threaded collar will slide off the torque tube and you can change the rear ball housing threaded collar nut seal (sandwiched between two steel washers), the tapered gasket in the transmission flange and the shims. There is a procedure for adjusting the ball housing using the shims (without the driveshaft attached). This procedure must be done with the driveshaft lowered. Basically, you install the tapered cork gasket in the forward flange and a few shims (there are 4-bolt and 6-bolt shims in the kit-the 4-bolt is for the manual transmission and the 6-bolt shim is for automatic transmissions ) . Bolt the flange with the tapered cork gasket, shims and ball housing to the transmission and check to see if you can move the tail part of the ball housing. If you can move the tail piece by hand, you need to remove a couple of shims and bolt it up again. When it’s too tight to move by hand, this is the shim setting you want. You just want enough shims to not be able to move the tail piece of the ball housing by hand. Note! Make sure your ball housing doesn’t have any major grooves or dings the outside where the tapered cork gasket and rear collar seal would contact it, as this can cause an oil leak, even with new gaskets. If you do have these issues, you will need to repair or replace the ball housing. Then you reinstall the threaded collar and ball housing (separately) back on the torque tube, slide them all the way back, raise the driveshaft to align with the front u-joint yolk, bolt the U-joint together with new lock plates,

fold the tabs onto the bolt heads, slide the ball housing over the U-joint, bolt the flange to the transmission, slide the rear threaded collar with the new seal in it and tighten it with a large locking pliers until the rear gasket seals against the torque tube. This keeps oil from leaking out of the rear of the ball housing. Then you need to add a pint of gear lube to the fill plug on the rear of the transmission (rear passenger’s side I believe). This is so you don’t run the U-joint dry before the transmission has a chance to send lube to it.

One more thing you should do while you are performing this procedure is to remove the plug at the differential to see if it is overfilled. If you get a lot of oil coming from the drain plug area (at a normal driving stance with the driveline attached) this is an indication that the seal in the front of the driveline is leaking oil from the ball housing area, down the torque tube, into the differential. The good thing is that the V-10* torque tube bushing corrects not only both front bushings, but puts in a new seal as well, correcting all of the issues with the front of the torque tube. The new seal in the V-10* bushing assembly rides on a part of the driveshaft that has never been used, so you have a new surface for the seal.

Installing a SB V8 in your old Chevy?

Here are some tips from a customer that had to find the correct radiator hoses!

It seems like this should be an easy task, but as my customer found out after numerous trips back and forth to the parts store, it’s NOT a no brainer! Gale Whitley has a 1948 Chevy pickup that he had me do some restoration work on and he found that the seemingly simple task of fitting radiator hoses to the small block V8 engine he installed was not so simple. He spent days researching and making trips to the NAPA store and finally found the hoses that would work for this combination. He said that the hoses he found route nicely but he did have to trim off some of the excess hose.

He asked me to pass on this information to save future restorers the headache of going through this task, so here’s the scoop:

This year I added seven new videos to my channel, specifically dealing with the removal, restoration, and reassembly of the doors for 1951-55 Chevy trucks. If you are planning to tackle this project on your truck, these are must-see videos.

You can see the series on my channel:

Check out my video on door hinge restoration for 1947-54 Chevy trucks: https://www.youtube.com/watch?v=aEoBFw8kaTE

How to restore your 1967-72 Chevy Pickup Vent Window Assemblies: https://www.youtube.com/watch?v=WiZOiHmcb_w 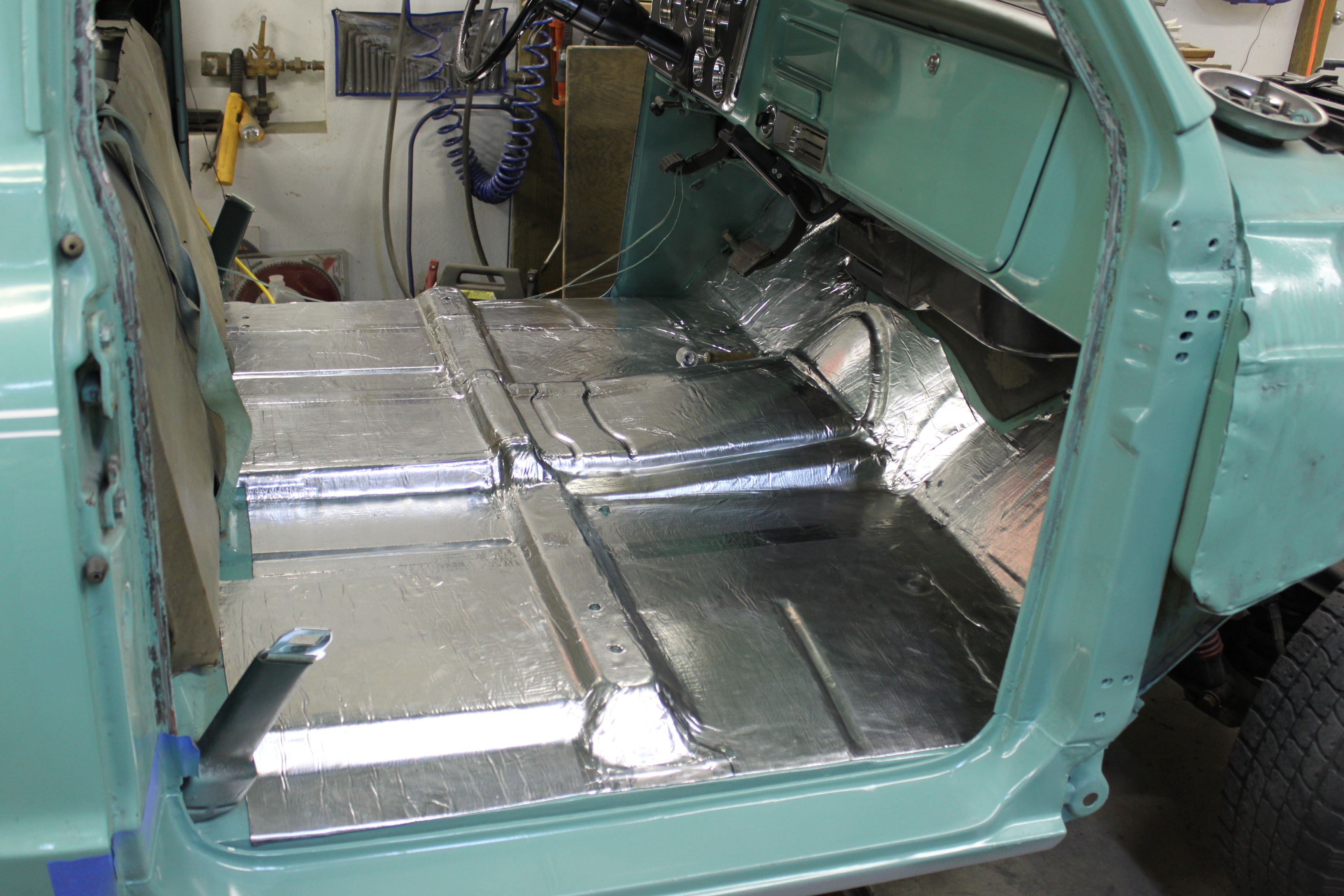 Starting from a bare door shell:

I know this all sounds complicated but it actually goes fairly quick once you get this rolling. The second door should take you half the time.